We want to confirm the office is open for business at this time. You can contact us by live chat, phone or e-mail.

Would you like to switch to the accessible version of this site?

Don't need the accessible version of this site?

Beware of a New Kansas Garnishment case: can you garnish wages deposited in a bank account? 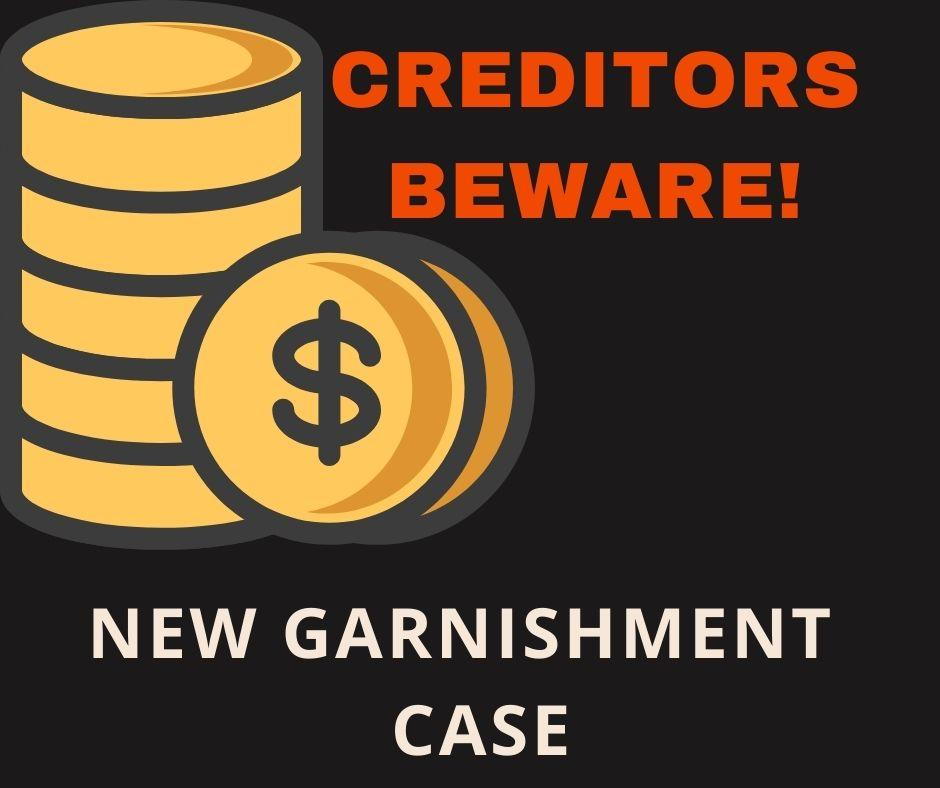 Beware of a New Kansas Garnishment case: can you garnish wages deposited in a bank account?

Creditors need to be aware of a case winding its way through the Kansas Court system. The case is Stormont-Vail v. Sievers, 58 Kan.App.2d 152 (2020) and it concerns the garnishment of wages. Specifically, what happens  once those wages are deposited in a bank account which is then garnished.  Are those wages still considered earnings? Which means they are subject to only  25% being garnished. In other words, 75 percent of a judgment debtor’s earnings cannot be attached by a wage garnishment order. Or  once deposited in a bank account do they lose this status, making all those earnings subject to a 100% garnishment?

A medical facility obtained a consent judgment against a former patient named Sievers,  for unpaid medical expenses. It then issued a bank garnishment or a nonwage garnishment on account Sievers had a Capitol Federal Savings Bank to collect the judgment. The garnishment captured $707.01.  Sievers  then objected to the garnishment arguing the funds paid and electronically deposited into his bank account were exempt from a nonwage garnishment:  the funds met the definition of “earnings” under K.S.A. 2019 Supp. 60-2310(a)(1). Relying on a Kansas Court of Appeals decision,  Dillon Companies v. Davis, 39 Kan. App. 2d 444, 447, 181 P.3d 570, rev. denied 286 Kan. 1177 (2008).

In 2008, the Kansas Court of Appeals made a ruling in Dillon Companies, Inc. v. Davis, that once a worker's paycheck is deposited (paid) into a bank account that all of the money/funds from that paycheck lose their status as "earnings" and are immediately subject to 100% garnishment.

Following a hearing, the District Court in  Shawnee County, Kansas issued an order overruling Sievers’ objection to garnishment. In its order, the court made one factual finding: “An ‘Order of Garnishment (To Attach Other than Earnings)’ was issued in the above matter on February 1, 2019, to Capitol Federal Savings Bank.” Summarily relying on Dillon Companies and  In re Adcock, 264 B.R. 708 (D. Kan. 2000) the court made one conclusion of law: “[O]nce [Sievers’] paycheck was deposited into his bank account, his wages lost their status as ‘earnings,’ and became garnishable under K.S.A. 61-3505.” The court then stated that it was not making “any other factual findings regarding the evidence and testimony presented.”

Sievers then appealed. The Court of Appeals, based upon Dillon Companies, found wages are “earnings” only while in the hands of the employer-garnishee and determined that the funds in Siever’s  bank account were not exempt from being garnished.  The appellate court noted that the Legislature  has the authority to enact restrictions on garnishment for deposited wages that are directly traceable to earnings. But the Kansas Legislature has not enacted a restriction on garnishment for deposited wages directly traceable to earnings. It is the Legislature’s role alone to do so. There is no language in K.S.A. 2019 Supp. 60-2310(a)(1) to support the expansion of “earnings” to include deposited funds that are traceable to earnings.”

While the Court affirmed the District Court's decision, it was not unanimous; Justice Standridge wrote a  dissent: “Based on the clear and unambiguous language of the governing statute, I would reverse the decision of the district court and hold the wages that were electronically paid to Sievers by his employer via direct deposit to his bank account clearly meet the statutory definition of earnings and are exempt from attachment through garnishment under K.S.A. 61-3505.”

The attorneys representing Sievers, Kansas Legal Services, petitioned the  Kansas Supreme Court to review the Court of Appeals, which in November  it granted a petition to review this issue, Stormont Vail Healthcare Inc. v. Sievers, No. 19-121109-A.  It is  pending and being briefed by the parties. After that is done the Kansas Supreme Court will decide if it wants to entertain oral arguments.

What hangs in the balance is the  ability of  debt collectors to garnish a worker's paycheck and then immediately take the balance of that paycheck from the worker's bank account.  While the attorneys representing Sievers consider this as an “opportunity to change the landscape for workers who live paycheck to paycheck”, so that debtors have  some money to pay  bills and provide for their family.

Please fill out the form below and one of our attorneys will contact you.

Thank you. Your submission has been sent.

Attorney Advertising. This website is designed for general information only. The information presented at this site should not be construed to be formal legal advice nor the formation of a lawyer/client relationship. [ Site Map ]

See our profiles at Lawyers.com and Martindale.com